The Bell Star DLX MIPS helmet is one of the most successful helmets in the market. In addition, this helmet has a sportier design than its kin, the Bell Bullitt.

As a result, most riders prefer this helmet for new-school street racing rather than on tracks. In addition, it has a unique interior that is specially designed to manage rotational impacts. So, let’s see what the Bell Star helmet has more to offer.

The Bell Star DLX MIPS has a smaller profile that ensures a perfect fit for the wearer. It is primarily for riders who commute in an upright position.

With a DLX visor, the helmet shields the user’s face better than any other helmet in its price segment. Moreover, as the visor is of Photo-chromatic material, the wearer will notice an immediate transition effect.

This feature makes the helmet suitable even for a night. In addition, the Bell Star DLX MIPS has a narrow neck opening designed to fit in even at high speeds.

Moreover, the helmet also has snug cheek pads made of foam that account for its smaller profile. As the foam is compressible, you get over 20-25 percent of the break-in margin.

You can also wear any shade with the DLX MIPS, as it has eyewear arm pockets on the interior. The best thing about the Bell Star DLX MIPS is its interior lining material. The company uses the X-Static fabric that is clinically proven to be bacterial-resistant.

It is because the company uses pure metallic silver to line the X-Static fabric. Coming to the build quality, the outer frame is a blend of Carbon fiber and fiberglass.

You can operate the chin vent with a slider installed on the interior with ease. However, its aerodynamics is not as remarkable as the Bell Star RSD.

Features To Consider When Buying A Bell Star DLX MIPS

When it comes to safety, the Bell Star DLX MIPS has a hard outer frame. It is crafted by blending fiberglass with compounds like Carbon and Aramid.

The compounds are mixed in an adequate proportion to form the most rigid structure possible.

In the entry-level helmet segment, the Bell Star is the latest and probably offers the best security. The Bell Star DLX MIPS is DOT approved and meets the FMVSS 218 standard.

Moreover, all Bell Star helmets are reviewed and certified by SNELL in the United States. It is the first helmet from the Bell company to have a SNELL certification.

The approval from SNELL made it a worthy racing helmet since 2015.

Each product undergoes a series of rigorous tests to inspect its built quality. Moreover, the Bell Star DLX MIPS has a decent SHARP rating of 5 stars.

It shares a similar weight of 1.5 kg with its kin, the Pro Star and the Race Star. However, users residing in Europe get a 1.25 kg Bell Star that differs from the US variant.

The shock absorption feature in the Bell Star DLX MIPS is better than the Bullitt variant. In addition, you get a regular expanded MIPS and EPS lining on the helmet’s interior.

Moreover, the helmet also has a polyolefin lining beneath the interior fabric surface. This lining is fabricated for impact protection during rotational movements.

The lining also secures the wearer’s skull from accidents caused at low and mid speeds.

When it comes to ventilation, the DLX MIPS is way better than the Bell Bullitt. The Bell Star DLX MIPS has three vents that connect the interior space to the outer environment.

Each vent is a portal that facilitates the lighter hot air to transfuse through its porous surface. So, you get a double chin vent, a brow vent, and a double crown vent on the Bell Star DLX MIPS.

With an easy-to-operate slider, the double chin vent is installed on the lower front part of the helmet.

Also, the Brow vent and the Double Crown vents are installed at the helmet’s top and rear portion. All these vents can be operatable by small sliders placed on the helmet’s interior.

However, these sliders may be hard to operate with leather gloves, but you’ll get used to it after a bit of practice.

The Bell Star DLX MIPS helmet has a row of exhaust vents at the rear. These vents combine in pairs to form the Double Crown vent.

Bell helmets are known for their wide aperture and quality visor. The Bell Star DLX MIPS has a visor with the tallest and widest aperture in the Bell series.

This large aperture gives a wide-angle peripheral vision to the rider on any road or track. The official name for the visor is “Panovision,” which is also a trademark of the bell helmet manufacturing company.

With a photochromic material, the Bell Star comes with Pinlock MaxVision technology. This technology ensures a clearer vision for the user even in foggy weather.

It has a magnifying power of 1 which reflects the actual image on the wearer’s retina. The visor also protects your sensitive retina from harmful UV rays.

Moreover, it has a decent polarizing power that reduces the intensity of the incident sunlight. The visor also has a quick-release system that allows users to remove it with ease.

The Bell Star DLX MIPS succeeds in more comfort than the Bell Bullitt model. However, the Bell Star is an entry-level model, but it is constructed from high-quality materials.

In this helmet, you will get two unique linings that account for its comfort. The idea of adding silver to the interior lining elevated the cost but also comfort.

However, silver in the interior lining is only seen in the Bell Star range of helmets. The Bell Star has an X-static XT2 silver liner.

In this helmet, thin silver threads are integrated with fabric imparts. As silver adds antimicrobial properties to the fabric lining, bacteria and sweat smells remain at bay.

The X-static XT2 lining is similar to the Virus Cool Jade lining, reducing the skin surface temperature up to 10°F.

However, the interior lining isn’t water-resistant, but there is no way water can penetrate through the vents.

The Bell Star DLX MIPS comes in 7 variants ranging from XS to XXL. Each size variant has a different price, and all helmets are of an intermediate oval size.

To ensure a perfect fit, the company introduced magnetic cheek pads on the interior. This feature makes it easier for the user to remove and wash the pads whenever necessary.

Moreover, paramedics will find it easier to remove these magnetic cheek pads in case of an emergency.

The Bell Star DLX MIPS has adjustable straps attached at the bottom of the helmet. The straps help you to get a perfect fit even if you ordered the wrong size variant.

Bell Star helmets also have a quick-release buckle system that offers better convenience. You also get a double ring set up like most Motocross helmets in the same price segment.

Setting the ring frame is just as easy where you have to twist the ring frame. Another feature is the chin guard that comes in all Bell helmets.

This Chin guard is located at the lower front side of the DLX MIPS helmet. As the guard is made of EPS foam, it provides comfort and safety at the same.

The Bell Star DLX MIPS helmet was introduced way back in 1967. At that time, people weren’t fond of street or track racing. As the market evolved, Bell started to redesign and modify the Star model. Now, it has features like the X-Static liner and Panovision Class 1 optics. However, the pricing exceeds the features, but it is better than the Bell Bullitt. 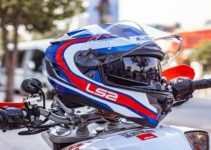 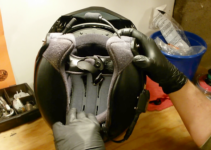 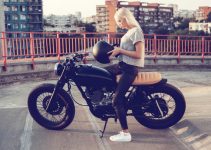